An early start to allow for one last game drive; to enjoy more and even welcome repeats of the wonders that the Masai Mara showcase could provide. We were heading west out of the Reserve towards the town of Musoma; located on the banks of Lake Victoria and across the border in Tanzania.

Although no apology was needed for only seeing one lion the day before which was magnificent, we were more than compensated as we drove towards the exits gate of the Masai Mara. Two male lions were “hanging out” by the roadside; an unusual sight as the male lion is a lone operator, but Erellah informed us that these had to be brothers to explain why they were together still.

We watched spellbound as they lapped from the roadside puddles; so similar in their actions from the pet cats we had left at home but so very different in size and strength. To have an opportunity to be so close to a lion in the wild dispels any doubts you may naively have held that it could not or would not despatch you in an instant given half the chance; the label of top predator is not misplaced or misjudged. A lion’s strength shouts out at you; its power cannot be ignored. The lion’s murderous tools of teeth, claws and muscles are casually shown; so confident are they in their power. A lion like a cat wears its weapons discreetly; dressed up in a nonchalant air that belies the fact that they are never not watching out for the next meal.

The emotions the first real sight of a lion in the wild stirred in us were confusing; we were victims of the contradictory behaviour of humans towards animals. This is anthrozoology which looks at the interactions between humans and other animals. Our liking and perception of certain animals can be created by distance, cartoons, cuddly toys and television, and means we tend to project our morals and expectations on to other animals; liking animals for their cuteness or how we love the childlike helplessness in their big eyes. Now we were seeing lions in the wild and saw the reality; a powerful instinct driven killing machine that would show no mercy. We were coming to terms with the fact that the lions would kill us; that they would not spare us if we talked to them or were nice to them.

We crossed the Mara, adorned with crocodiles and hippos, and drove through plains and hills bedecked with wildebeest; like chains of decorations with no end. The route dropped down into a more forested area and fortune was on our side; an elephant was busy eating away by the side of the road. As we stopped to watch, crashing and cracking from within the trees soon drowned out our comments, and around thirty more elephants emerged from the depths to join in with the roadside feasting. 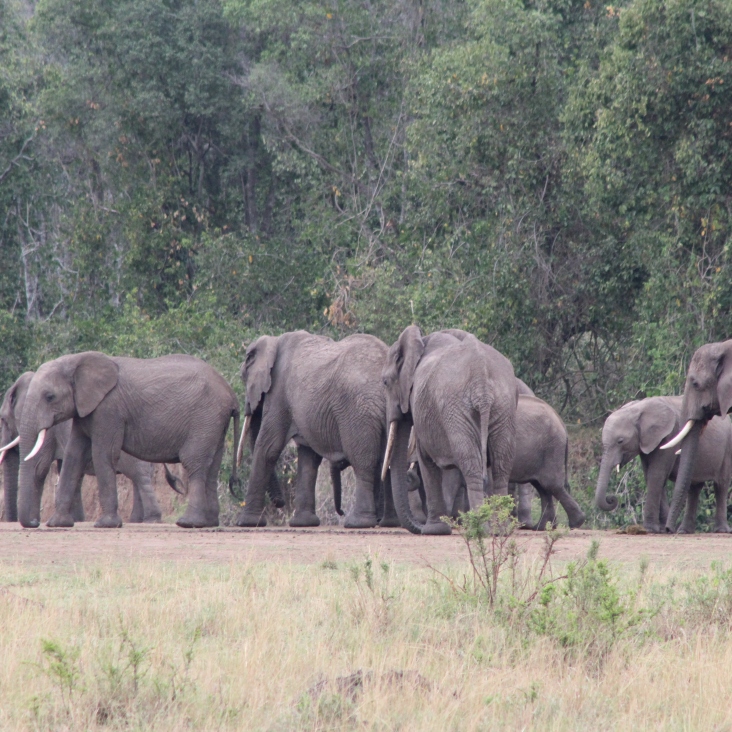 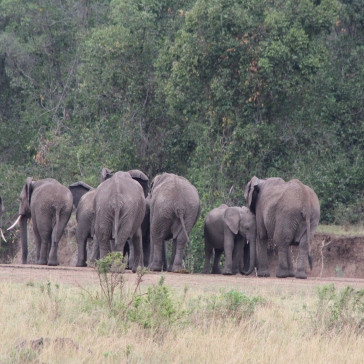 Erellah told us that we were looking at a herd of related females and their calves, as males live alone or sometimes form small groups with other males. Elephants live up to around seventy years, and we could clearly see that there was a wide age range in this herd, and a very complex social structure that was dictating the elephants’ behaviours and mannerisms. The calves were a delight, and it was very touching to see their relationship with older elephants who nurtured, educated and protected them. Elephants use their feet to dislodge hard roots, and the whole truck was “kicking” with a calf that, copying an older elephant, valiantly kicked away at a tiny plant with no success.

The road left the Masai Mara National Reserve and continued through the adjoining Narok County & Mara Conservancy; a transit only pass means just that so it was not possible to stop and view two lionesses relaxing by the road side. The route beyond led upwards through the Western Highlands and matched the road into the Masai Mara in the depth of ruts, the angles the truck was forced to travel at and the drumming of the wheels on the uneven surface. Several times both sides of the road were visible in one movement of the truck, as we tortuously approached the summit in a series of zig zag movements that seemed to take us further away rather than closer to the top. The area was lush and green with a fresher temperature; full of neatly ordered rows of tea bushes and a whole range of housing ranging from mud hat to gated brick built properties. The scale of our truck and the challenges it was tackling provided entertainment for the locals, especially the children, whose waves and smiles we returned in equal measure.

We were due to camp that evening on the shore of Lake Victoria in the town of Musoma, but before that there was the small matter of the Tanzanian border to cross. You must purchase a $50-dollar visa for Tanzania and fill in an application form; Erellah also had to list our details on to a group form and the truck would also be carefully scrutinised. The whiteness of the building, the large number of signs and the quantity of guns on show create a lamb like attitude in tourists, and we dutifully followed Erellah in a straight line to hand over our documents. Once inside it was Africa again with conflicting window choices for documents, and a haphazard order to processing visas that bore no relationship to your position in the queue. The obligatory yellow fever certificates that we all carried were also of no interest to anyone.

Back on the truck it was announced that the computers were down and our visas could not be processed, but while we waited lunch would be prepared and served where we now stood: diplomatic no man’s land between Kenya and Tanzania. The area was brushed, tables came out and lunch was prepared, and there, in diplomatic isolation and much to the amusement and curiosity of the children who watched, we dined.

Lake Victoria is described as Africa’s second largest freshwater lake, and is bordered by Tanzania, Uganda and Kenya. The source of the Nile River, it was named in honour of Queen Victoria by John Speke who documented it in 1858, but is known locally as Nam Lolwe, Nalubaale or Nyanza.It is fed predominantly by rainfall and is comparatively shallow; on average 30 to 40 metres and up to 80 at its deepest.

Our campsite was literally at the lake’s edge; its’ vastness leading away from the shore into the distance. The lake had no end, and was suitably partnered by the vastness of the overarching sky that was filled with the setting sun; adding bright orange and blood red to the mauves and purples that heralded the approaching darkness.

We were in a new country, and tomorrow’s journey into the world-famous Serengeti National Park was ahead, but at that moment it was all about the shallowness of human nature, as we raced to the bar and the promise of free wi-fi after five days of technology deprivation.

As we drank and then slept our driver Sam took the truck for emergency repairs. When we awoke and went for breakfast the truck had a new leaf spring; the old one having been destroyed by the unforgiving roads of the Masai Mara. Not an insignificant physical and mental task to have completed, and done without reference to our idea of the hours in a working day.

Read my African Adventure from the start and add your comments:

5 thoughts on “An African Adventure-Day 5”